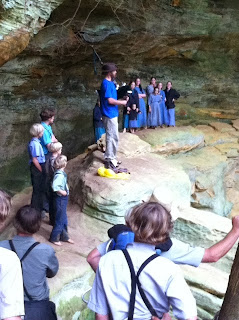 Occasionally, my experiences for The 52/52 Project have ended in the unexpected. While I tend to imagine how certain ventures might play out, when I created my list I never envisioned catching the bride’s bouquet at the wedding reception I crashed, accompanying a SWAT team on a drug raid, or meeting a homeless woman whose personal story would touch me forever.

As John Lennon so insightfully wrote, “Life is what happens to you while you’re busy making other plans.”

When I landed safely on the ground after my zip-lining excursion, I figured the biggest surprise was that I actually enjoyed the experience—and managed to survive to say so. Yet the most extraordinary moment of the day occurred not while I was soaring above the ground but at the end of our visit to Hocking Hills State Park.

With a couple hours of daylight remaining, my friend Murf was eager to hike one of the park’s trails. Her college freshman daughter, Leah, and I were far less enthused; the rain had started right after we finished zip-lining and it showed no signs of ending. But after sitting for a half-hour in a shelter house, my relentless friend finally convinced us. We set off on a slightly muddy trail, with rain hoods, a single umbrella, and only one of us with a good attitude.

About a half-mile down the trail, we encountered a group of people ascending a set of stairs cut into a cliff.

“It’s beautiful down there,” one of them told us. “You really should check it out.”

I glanced down at the narrow, winding steps, slippery with wet autumn leaves. Leah and I exchanged frowns.  The entire park had been beautiful. We’d already hiked, oohed and ahhed at the scenery, and gotten to be one with nature. Whatever lay at the bottom of those steps, even if it was hidden treasure, surely wasn’t worth the effort. Still, Murf—the friend who once convinced me to let her drive my mother’s car down the sidewalk in her college town—soon talked us into slogging down the stairs.

We maneuvered our way down, stepping carefully and grasping the rocky walls for stability. As we neared the bottom, I paused. Did I hear music?

The stairs opened up into a huge cavern. I gazed around to find a group of Amish people—nearly three dozen men, women, and children in traditional Amish clothing. Most were seated on the half-circle of rock floor, and others stood around them. Every one of them was singing. Their voices echoed throughout the cavern.

My friends and I glanced at each other with wide eyes and then we stood, listening, mesmerized. As they finished the last, perfectly harmonized chorus of “Amazing Grace,” I felt compelled to clap, but applause somehow seemed an inadequate response, inappropriate or even sacrilegious. And then, just as we started to walk away, one of the seated men slowly stood and began playing the bagpipes.

As surreal experiences go, as any of the memorable moments in my past six months came to be, this may have topped the list.

After talking with them afterward, we learned that not only was it our first visit to that cavern, it was each of their first times, too. The bagpiper wasn’t even among the Amish group. None of this experience was anticipated or planned, by any one of us.

It was pure serendipity that we all found ourselves there at that spot, on that day, at that exact moment.

As we left the park, I reflected upon how taking a small chance in life, following a whim, can change a life. If I  hadn’t decided to take that trip down south, if I hadn’t dismissed all my misgivings, if I hadn’t explored down those treacherous stairs into that cave, I would have missed out on that moment: which proved to be one of the most amazing and beautiful moments I’ve ever experienced.

Was it fate or was it chance that led us down those slippery, rocky stairs that day?

All I know is the familiar road we choose to travel, over and over again, may be the safest and most comfortable. But, sometimes, we need to look beyond, above, and even below that well-worn path.

Because that’s often where the most beautiful soundtrack to our life exists.

What's the last thing that surprised you? What holds you back from taking that less-traveled road? Is it fate or is it chance that plays the biggest part in our lives?

Posted by sherry stanfa-stanley at 9:09 PM