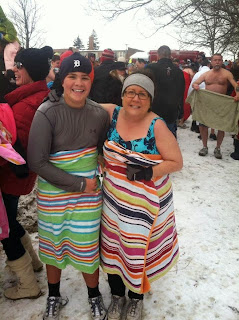 Following my recent ordeal of baring it all at a nude beach, I promised I’d never again complain about cramming my full-sized, middle-aged parts into a bathing suit. Clearly, I never considered the fact that I’d be donning one on New Year’s Day—in Ohio—while plunging my half-naked body into the icy waters of the Maumee River.

As I stood, shivering, on the snow-covered riverbank, it’s very possible I complained once or twice. Or maybe fifty-two times.

I’d lived my entire life in northwest Ohio and spent the last twenty-five years in Waterville, just up the road from the locale of what’s believed to be the oldest Polar Bear Plunge in the United States. Still, I’d never wandered over to even watch because, baby, it’s cold out there! And those people who jump in a frozen river in January are certifiably ca-ray-zee.

But, considering how far up the Insanity Meter my life had measured over the past eight months, crazy suddenly seemed very gray territory. So, as the temperature hovered around sixteen degrees, with a wind-chill of five, I ventured down to the river to take a mid-winter swim.

My fifteen-year-old nephew, Cole, joined me. As we plodded through four inches of snow to the riverfront, I pounded him on the back and told him he was brave. Silently, I toyed with the idea that the poor guy was just genetically inclined toward stupidity. Although my sister, Lori, and brother-in-law, Mike, didn’t make the plunge, they did come along to provide moral support—and, more important—towels and a pre-heated escape vehicle.

A few hundred people gathered along the shoreline. Cole and I attempted to stave off frigidity by wearing our swimsuits underneath heavy sweats and winter coats. Many of our comrades arrived shirtless, in Speedos and flip-flops. One guy came in a bathrobe and Viking horns. Another wore nothing more than a threadbare pair of tighty whiteys. I pointed them out and rolled my eyes, until I quickly realized that while this might be a circus, the two of us were active members of the freak show.

We waited, shaking on the shore, for nearly five years—or five minutes— if one must be technical.

Finally, someone announced that swimmers should get ready. My nephew and I stripped down to our swimsuits.

And then, nearly naked, we hurried up to wait another five years.

“This isn’t so bad,” I said to Cole, as we huddled together, hugging ourselves. “I’m not really that cold, are you?” My words escaped through my mouth into a frosty cloud in the air. His teeth chattered in response.

Before I realized my words weren’t fully connected to my frozen brain, a hundred people in front of us suddenly raced into the river.

We’d been forewarned it would be safest to wait for the rush of the first crowd entering the water. So, we stood by for a moment, watching and listening to the screams of swimmers splashing into the river. What we weren’t told was that we would be plowed over when that same group immediately turned and fled from the water.

As we attempted to maneuver past the oncoming and frantic, frozen mob, I discovered Polar Bear Plunging was, literally, a slippery slope toward madness. The crowd had compacted four inches of snow into a slick, icy hill. I wore my oldest throwaway pair of sneakers, with not an inch of tread remaining. Just before I went air-born, Cole, who was wearing his football cleats, grabbed my hand and steadied me.

We ran into the water.

Within seconds, our ankles and feet went numb. Even while outfitted in special socks loaned by a friend who’d done the plunge a few years ago, we couldn’t feel our toes. At that point, we figured we had nothing to lose. We crouched down into sitting positions, allowing the shallow water to reach our chests. As the rest of my body fell numb and my brain went hazy, I gazed up at the two rescue squad trucks on shore, praying the EMT squad was watching me closely.

And then, as quickly as we’d raced into the water, we raced back toward the shore, our legs kicking up shards of ice.

I learned later that the water was a balmy thirty-two degrees. That river was damn toasty, compared to how frigid the air felt once we exited the water.

Did I mention it was cold?

No, cold is how you feel when your furnace hasn’t kicked in yet in November. Or when you are forced to walk from your heated office to your nearby, not-yet-warm parked car. Or, perhaps, when your parka, hat, and mittens don’t quite take away the sting of a two-minute ride down a toboggan hill.

Exiting a frozen river in the frigid winter air? This was way, way beyond cold.

I attempted to dry off with a towel. Unfortunately, the nylon leggings I’d worn beneath my sweatpants, to stay warm during the wait, had proven impossible to remove before my swim. Now, they clung to my legs, trapping a layer of cold water from my waist to my ankles.

In the car on the way home, Cole reached down to take off his cleats. Not an easy feat, considering his shoe strings were frozen solid. As we slowly thawed—a process which would take days—our bodies exploded into pins and needles.

I languished for fifteen minutes in a hot shower, drank a hot cup of mocha in front of the fireplace, and reflected on my day.

By taking part in Waterville’s 85th annual Polar Bear Plunge, I’d checked another new experience off my 52/52 list. I wasn’t sure if the fact that three hundred other people had joined in was reassuring or just plain frightening.

Many of them were already talking gleefully of returning next year. Me? I figured it would be a cold day in hell before I jumped in that frozen river again.

That would be crazy.

Up for a little wintertime swim? What's the craziest thing you'd never do again?  And what do you think it will take to erase the old guy in his threadbare tighty whiteys from my memory?
Posted by sherry stanfa-stanley at 7:54 PM