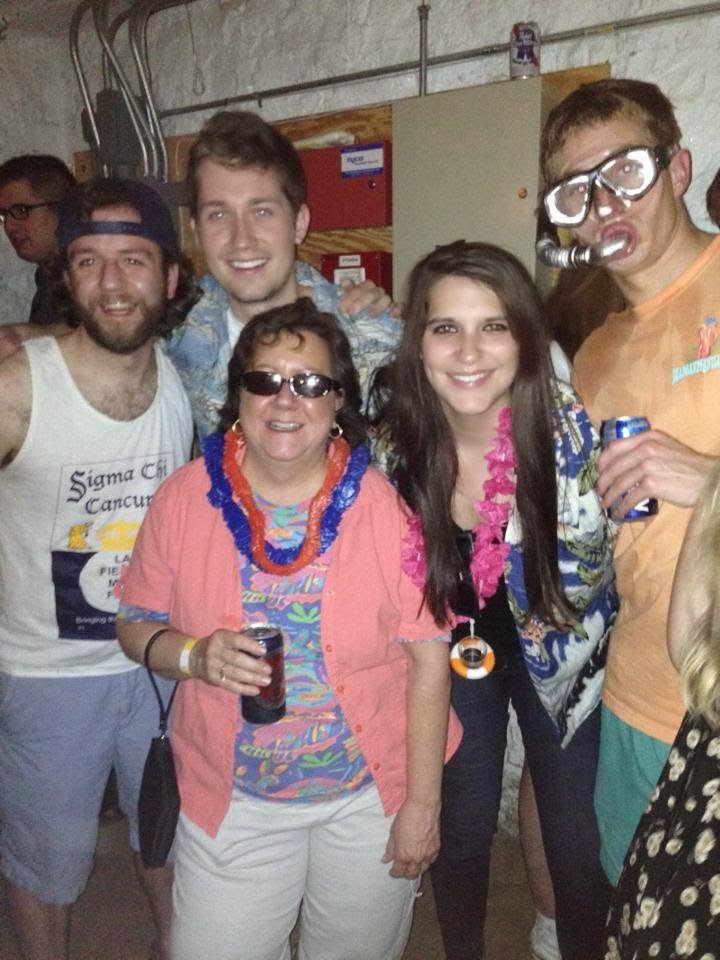 Apparently I have disappointed several Sigma Chi guys and all their fabulous female friends by not posting a story about my frat party experience. I do not want to let down my new BFFs, so I will say this much:

These guys know how to host a party! Want to throw a beach party in chilly Milwaukee in early April? Fill the basement with sand! (They make the freshmen shovel it out the basement windows later.)

Want to make the strange old lady feel at home? Play "Shout!" And dance with her without even questioning her attendance. (Although one girl did come up to me and ask, "Who are you and why are you here?" I said I was pledging the fraternity. She seemed oddly OK with that.)

But do warn the grandmotherly aged woman about that far back room, the dark one with strobe lights and couples in the corners. Even the moonshine I swigged from a communal bottle didn't prepare me for THAT.

An Animal House it may have been, but Dean Wormer's wife I am not. I figured it was a good time to take my talents to a local bar, with Son #2, and managed to close the place up.

A win-win night, all around.

I'm thinking my fraternity pledge is pretty much guaranteed.

Impossible to pick me out in the crowd, yes? What would you have brought along as a hostess gift? How are your partying skills?
Posted by sherry stanfa-stanley at 10:42 PM 1 comment:


By week #43 of The 52/52 Project, the biggest lesson I’d learned by pushing myself outside my comfort zone was the expectation is almost always worse than the reality. Apparently though, the expectation can sometimes prove frightening enough.

While I don’t have an actual fear of heights, I am terrified of the sensation of falling from high places. I hardly even quiver on the top of a presumably stable skyscraper or bridge, but any structure that moves—or any experience that results in my moving and potentially plunging downward—is generally a deal-breaker.

The high ropes course at The University of Toledo’s Recreation Center is situated forty feet above the ground, high above the center’s basketball courts. It includes a series of swaying ropes and wooden swings strung from the three-story-high ceiling. The goal is to climb, stretch, and step one’s way across this mid-air obstacle course. Presumably, a harness and single cable prevents one from crashing to the ground. From the online photos and description, it appeared intimidating. Possibly fun. Nope. Just intimidating.

Yet, because my zip-lining experience had proven to be way more enjoyable than expected, I figured I’d hope for the best and push myself through this. I’d grown braver and more open-minded. Possibly, I was just more stupid.

My friend, Laura Maylene Walter, and her fourteen-year-old cousin, Haley, drove in town to join me. Laura had done a high ropes course when she was fifteen, and it proved less than a positive experience. At the age of thirty, she was willing—with great reservation—to give it another shot. We thought we’d make a good match: two chicken shits supporting each other through an agonizing challenge. And, young Haley would surely provide the necessary naïve bravado to encourage us onward.

Our litany of excuses to back out commenced as soon as we climbed into the car. We should call it all off because poor Haley had a stomach ache. The parking lot was crowded; maybe we wouldn’t find a parking spot. And, if we got really lucky, the Rec Center office wouldn’t find the free guest passes I’d been told were left for us. By the time we reached the center’s third level, we devised a half-dozen excuses before we ran out of any viable ones.

Once we filled out our waivers and took our place in the long line, we took a good long look around. Every other participant appeared to be a college student. Most were lean, muscular, and surely in the physical prime of their life. Yet, to say they were struggling on the course would be an understatement.

The online photos didn’t give justice to the terror. The challenge wasn’t just in the height. It was obvious the course relied on both intricate coordination and great upper-body strength in order to grab each consecutive rope, balance upon the swing, and step to the next.

We watched a young woman in a tie-dyed shirt attempt to step from one swinging wooden beam to another. The swings were situated a couple of feet apart, but as she stretched her leg from one to the next, the wooden plank kept rocking further away. Over and over, she stepped and missed. She finally grabbed the next rope and managed to secure one foot on the beam. She reached her second foot over and succeeded in balancing her entire body on the wildly rocking swing.

The step onto the next swing proved even more challenging. As she tried to balance herself, the swing flipped backward. She slipped off. The security cable clipped onto her harness jolted her to a stop. She dangled and swiveled, mid-air.

We couldn’t watch her another minute.

We turned our direction to a young man maneuvering his way across. He painstakingly watched his footing, trying to catch hold of the next violently rocking beam, all the while pulling his security cable along the way. His odds didn’t appear so good.

He paused and shouted to someone on the catwalk. “OK, this is why they make you sign a waiver!”

I turned to one of the attendants. “How often have you seen people slip off and have to dangle there?”

We observed the participants for nearly a half-hour, during which we subtly—without even mentioning it aloud to each other—stepped out of line.  But, we knew we had to make a decision. The time had come to take flight or to flee.

“This is way worse than the one I did when I was fifteen,” Laura said.  “And I was in great shape then. I’m not sure I have the physical strength to do this. And, I might puke in my mouth from terror.”

I nodded in spasms. “Yeah, and I’m even more worried about the coordination required. Because I have a whole lot of none.”

I realized that was the true deal-breaker for me. I could—although reluctantly—handle airplanes, zip-lining, and hopefully my upcoming hot air balloon ride, because those relied on the skills of a qualified pilot or technician. Left up to my own inadequate coordination, I was fairly certain I’d be S.O.L.

“Honestly,” Laura continued, “I’m pretty certain I’d have a panic attack midway through. What then? When you’re halfway through and can’t take another step, how do you get down?”

The disclaimer for the high ropes course specified only that participants be at least fourteen-years-old and four-feet-ten-inches. I was safe by thirty-eight years and two inches. But those requirements didn’t take into consideration my stubby legs and arms or my chronic clumsiness. And I was fairly certain the terror of these recreational gallows would take twenty years off my lifetime.

Laura sighed in relief. I turned to Haley, who had remained fairly quiet. “What do you want to do?”

She raised her hands up in the air. “Not this! This should be illegal!”

The decision was mutual. We agreed this was a disaster just waiting to happen. Those swinging ropes might just as well have been wrapped around our necks.

Over the past ten months, I’d made it through forty-two of fifty-two new challenges. This was the first I’d failed to see through fruition. As we crumpled our waivers and headed downstairs, my failure troubled me. I hung my head. “I can’t believe I couldn’t go through with it.”

"Maybe we could just Photoshop ourselves in," Haley suggested.

Laura patted my back. “You failed at one. Look at it like a narrative arc in a story. There always has to be one really low point, one major conflict for the protagonist. And this was yours.”

From a writer’s view, she had a point. And, maybe there was more to it. Perhaps acknowledging our limitations is an essential part of self-discovery. We may learn just as much about life and about ourselves by discovering our weaknesses as well as our strengths.

Besides, the evening wasn’t a total loss. Being there together to watch the participants and imagine our own agony and defeat, while my cohorts spewed out some terrific one-liners, proved pretty enjoyable. Quite likely more fun than if we’d actually gone through with it. I’d never simultaneously shuddered and laughed so much. And, as a bonus, we survived to be able to say we’d failed.

I never stepped a foot on one of those treacherous swings.

But, damn if it wasn’t the best experience I never had.

What constitutes failure and success? Do we get points in life just for showing up? When's the last time you failed and felt OK with it?
Posted by sherry stanfa-stanley at 9:08 PM 5 comments: