Over the past few months, I’ve been spending a lot of time in libraries.

I remain in awe of the architecture, particularly in an older structure. I enjoy the helpful attitude and enthusiasm of the librarians—I mean, why wouldn’t they be enthused? They have the best job ever! And then, there’s the books. Oh, the shelves and shelves of books—a free bounty for our browsing and borrowing.

Several months ago, someone asked me about the books and authors who most influenced me as a writer. I named several, with ease: those that awakened the fledgling writer in me as an eight year old girl as well as the fiction writers, memoirists, and humor essayists who still inspire me now.

Yet this also prompted me to recall those books that first made me a reader, too: picture books, paperbacks ordered through my grade school Scholastic flyers, and early chapter books.

I remembered, particularly, a single moment of raw reader excitement. I was six or so, newly able to tackle an early reader independently. On one of my weekly trips with my mother to the library, I checked out a book at the librarian’s suggestion. When we returned the following week, I told the librarian how very, very much I loved it.

She walked with me to the children’s section and pointed to a shelf. Waving her hand, she noted that it was just one of an entire series by the same author. I stared, wide-eyed, at a dozen or so books lined up there, simply waiting for me to take them home and escape into their stories.

It may have been one of the most joyous moments of my life.

For months, I have tried to remember the name of the author or the title of the book series. I knew it was about a family with a last name beginning with B. That’s all I could recall. After all, I had been only six or seven the last time I read one. I searched online, but with little else to go on, it was a futile quest.

Last week, out of nowhere, it suddenly came to me.

I discovered the books were no longer in print, so I ordered a couple from an online used book site.

When they arrived in mail, I picked one up. I brushed my fingers over the pebbly hard cover. I opened it up and paged through. And then, I instinctively sniffed the pages.

Within seconds, the musty book smell returned me to my childhood library, 50 years ago.

When I was little, I believed the library was the most magical place in the world.

Some things never, ever change.

Is there any better smell than that of an old library book? What are your most beloved childhood books?
Posted by sherry stanfa-stanley at 8:32 PM No comments:

Badasslands: You Have to Live It Every Day 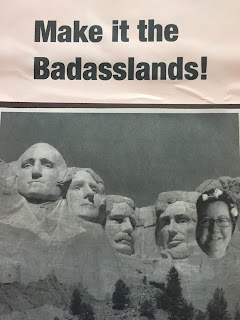 Public speaking is among those life experiences that still remains outside my comfort zone.

As an author with a new book, I have to do it anyway. A lot.

And book events are less painful and weigh FAR more on the amazingly fun side when a reader in the audience holds up a sign like this.

Speaking in front of a crowd? A yay or a nay for you?

Posted by sherry stanfa-stanley at 8:47 PM No comments: