Pajama Party: Of One 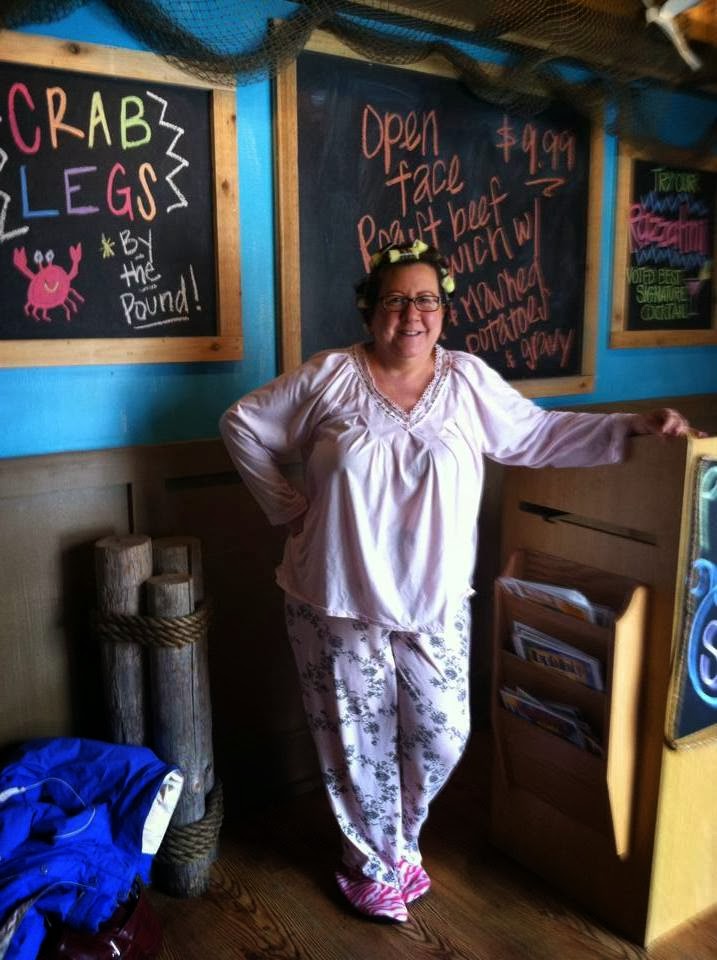 The clerk at Barnes & Noble eyed me suspiciously. He followed several yards behind me, peeking around the corner each time I wandered down another aisle. Maybe I was just being paranoid. Maybe it was the oversized tote I carried as a purse, which potentially could be filled with a half-dozen shoplifted books.

Or maybe it was due to the way I was dressed that afternoon: in pajamas and slippers, with a headful of curlers.

As crazy as I felt for venturing out in public this way—as part of The 52/52 Project—it was likely only half as crazy as I looked.

When I originally envisioned this experience, I imagined climbing out of bed that Sunday morning and simply heading out for the day with no preparation. But I often sleep in a pair of drawstring pants and a T-shirt: an outfit that loads of people now try to pass off as daytime public apparel.

So, that morning I perused my PJ drawer until I found a pink set that would be recognized unquestionably as the pajamas they were. I peered in the mirror. Perfect. Except for the minor detail that the sheer fabric clearly showed off my boobage. That particular exhibitionist ship had already sailed, during a nude beach experience I didn’t care to repeat. I strapped on a bra below my PJ top.

Next, I slipped into a pair of fluffy pink slippers. I might look ridiculous, but I would do so while being fashionably color-coordinated.

The coup de grâce was the package of multi-colored foam curlers I’d purchased the day before at Dollar General.

I hadn’t worn curlers since I was a sophomore in high school. I still remembered how uncomfortable foam curlers were to sleep in, yet I failed to recall how difficult they were to put into place. I spent twenty minutes attempting to roll and clasp them shut. They either hung limply by a strand or fell out completely.

Afraid I’d be late for my morning breakfast date, I stopped on the way at a nearby friend’s house. When she didn’t answer my repeated banging at her door, I was left again to my own inadequate beautician devices. While parked in her driveway, I managed to get a dozen curlers entwined in my hair, and then headed off to the restaurant.

I shook my curler-covered head at the irony. I’d taken a hell of a lot of effort with my appearance to look as if I’d made no effort at all.

Breakfast was at a place called Chowders ‘n Moor. A fitting nautical name for a diner feeling like a fish out of water. As I crossed the parking lot, I passed a middle-aged couple leaving the restaurant. The woman glanced at me, then shook her head and muttered, “Okaaay. Looking good, honey.”

I kept walking. I could be wrong, but I doubted it was a compliment.

While I gathered many strange looks at the restaurant, our young server barely blinked an eye, even as a foam curler dropped off my head. Neither did Julie, the friend I was meeting for breakfast. A good sport, she simply laughed and didn’t seem a bit embarrassed to be sitting with me. Ironic once again, since I’d often embarrassed my friends, although unintentionally.

My next stop was grocery shopping at my local Kroger. As I roamed the frozen food section, I noticed that many of the customers were dressed in their best Sunday-Go-to-Meeting clothes. I was not.

At first, I tried to avoid the stares. Then, I forced myself beyond my discomfort by looking people in the eye and smiling. Interestingly, those who were thirtyish or younger proved more likely to smile back. Those middle-aged or older either averted my glance or offered me a disapproving look.  And then, they often peeked into my cart to see what I was buying.

I don’t know what they expected a presumably unstable person’s cart might contain, but I hoped a head of lettuce and package of chicken breasts might offset a twelve-pack of beer.

My final public appearance was at a Barnes & Noble store in an upscale suburban shopping center. The same pattern followed. Younger customers barely glanced at me, and the older crowd watched me reproachfully, especially as I sat awkwardly in the café for a half-hour, attempting to read a newly purchased book and drinking a venti mocha. While this was a new experience for me, I guessed it was a new one for most of these seasoned bookstore shoppers, too.

The amateur psychologist in me tried to analyze this discrepancy in people’s attitudes. Was it due to the fact that younger folks were more open-minded and had not yet grown as judgmental? Or did the younger generation simply have more lax standards of what was acceptable to wear in public?

I’ll probably never know, unless I continue to research this through repeated excursions of shopping and dining in my night-time best. Yet I’m not so sure I can handle more of that kind of embarrassment. And lord knows I can’t safely secure another foam curler in my hair.

I’m guessing I might find a kindred spirit or two there.

How informal do you get in public? Would you blink an eye? Anyone looking to buy a package of barely used foam curlers?
Posted by sherry stanfa-stanley at 9:07 PM