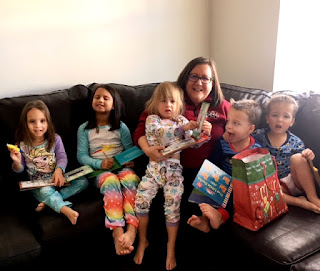 Riddle me this: What has eight legs and four overactive brains, talks constantly yet doesn't really say much, exists primarily on chicken nuggets and cheddar goldfish, and makes you simultaneously crave both a nap and a grandchild?

A set of quadruplets.

Last weekend, I had the privilege of hanging out again with the Baldwin Quad Squad. I first babysat the quads when they were six months old and then again at eighteen months. Now, they are age three: and they have grown into four bright, delightful, and very busy little people.

Their adorable older sister helped direct me, with her big sister expertise and first-grade know-how. Sure there were a few moments when they made it clear they didn't care to follow my directions. Or when I looked up--searching for a wayward quad--and realized I definitely did NOT have all my ducks in a row,
But after almost three hours of constant conversing, doing artwork, playing games, and trying to convince them I do not have a pet elephant (??), we once again bonded. Before they headed upstairs for their afternoon naps, we hugged, loved on each other, and said goodbye--until the next time.

My two sons are now grown men, and the memories of them as toddlers have grown hazy. Who knows when I will experience the joy of grandchildren. But thanks to a random experience in my 52/52 Project, I hope I'll always have the Quad Squad.

Sometimes serendipity steps into your life in the form of several tiny, smiling faces.

Small children: Adorable? Or carpet-crawling, curtain-climbing rugrats? What's the biggest challenge in your life that still brings you happiness?
Posted by sherry stanfa-stanley at 11:23 PM