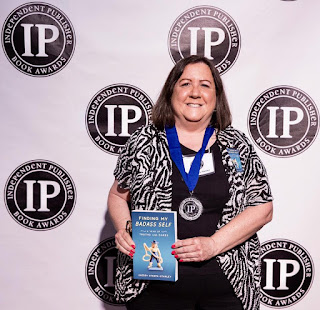 Tomorrow, Aug. 15, marks the one-year anniversary of the publication of Finding My Badass Self: A Year of Truths and Dares.

While the crazy journey that led to my writing the book changed my life, the past year has been equally filled with incredible new experiences.

Over the past year, I met hundreds of people and forged rewarding relationships at book signings and speaking engagements throughout several states.

Those book events have led to other speaking invitations, including an author panel at a national writers conference as well as motivational speaking engagements for a number of companies and organizations. As I often tell people, it’s dumbfounding that I’ve somehow become a motivational speaker—considering I’ve always been far more of a cautionary tale.

The year was filled with many surprises, including three international book awards. I also received an inquiry from a major production company in Los Angeles, wanting to know if the book’s film and TV rights were available. Sure, that inquiry hasn’t resulted in an actual purchase, but opening that email was a surreal moment I will never forget. (Shout-out to Will Arnett: The rights are still available! And I just might be convinced to have a cameo appearance!)

Yet the greatest highlights have been the reviews, Facebook posts and comments, and personal conversations with people who enjoyed the book. Nothing has been more rewarding than knowing I provided so many readers with a few laughs, a couple of cringes, and an occasional kick in the ass to shake up their own life.

None of this would have happened if I hadn’t taken that first hesitant step into The 52/52 Project, back in the summer of 2013. And then took another step… and yet another…

Did I truly find my badass self? Well, that’s possibly an overstatement. But I’ve surely grown beyond the person I was five years ago.

Tonight, after returning from closing on a new home, I am filled with a combination of anticipation and even a bit of apprehension. By opening this new door—figuratively and literally—who knows where this newest change in my life will take me?

Whether I face a series of unexpected challenges or else just pure serendipity, I’m ready to discover more truths in my life by embarking on many more years of continued dares.

I hope my ongoing journey inspires you, even a bit, to do the same. Thanks to all of you for following along.
Posted by sherry stanfa-stanley at 8:08 PM