I'm Just a Singer (in a Rock and Roll Band) 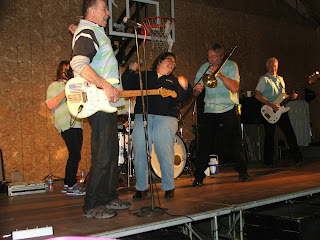 I had a few hard-and-fast rules about jamming on stage with a band for my 52/52 Project:

- Rehearsing with the band
- Singing back-up only (singing lead would wait until my promising music career exploded)
- Looking hot, with a great haircut and an ultra-cool outfit
- Being at least two sheets to the wind
It was a good plan. But, as the saying goes, if you ever want to make God laugh, just tell him you have a plan.

I’d already been invited to sing with a band and was still waiting for confirmation and details when I attended a huge party at my friend Joan’s house. The occasion was the rivalry game between Ohio State University and The University of Michigan. More than a hundred guests filled a large barn to watch the game on a projected screen. Afterward, most stayed to enjoy The Danger Brothers, a popular Midwest band Joan and her husband, Bob, hired for the day.

As parties go, it was top-notch. A great crowd, fabulous food, and terrific live music. In between songs, while I congratulated myself on having the nerve to get up on the dance floor—while fully sober—I overheard my son, Kyle, talking to Joan. Something about, “My mom… the 52/52 Project… singing with the band.”

I rushed over. “No, no, no! Not today,” I explained to Joan. “Yes, singing on stage is on my list, but I can’t do it today. I need to be prepared. I have to plan a song and rehearse it first. Plus, I’m wearing this old sweatshirt and jeans, and I had to cancel my long overdue haircut last week. I don’t look hot at ALL. Today is definitely not the right time.”

Joan nodded and smiled. I slunk back to my chair. She climbed on stage, and I held my breath. Thankfully, it appeared she was only announcing a couple birthdays. I blew out a sigh.

And then the keyboardist called me up.

I plodded, zombie-like, toward the stage. I passed my grinning son. “But I didn’t get to rehearse,” I hissed at Kyle. “And I’m totally SOBER.”

My 52/52 life flashed before my eyes. My Brazilian wax. My “Survivor” audition. My tent-camping, mime, and nude beach experiences. And now, this. I hung my head. Why did I keep finding myself sober at the most inopportune moments?

The keyboardist smiled at me. “So,” he asked, “What do you want to sing? Any particular song? Any special band?”

I stared blankly at him. Being suddenly put on the spot, I had nothing.

He forced an encouraging smile. “The Stones or maybe The Beatles?”

The Beatles! Yes, my saving grace! I couldn’t tell you what I had for dinner last night (probably microwave popcorn and beer), but I still knew every lyric The Beatles ever wrote.

“But you need to sing with me,” I whispered to him. “I can’t sing lead by myself.”

In honor of the birthday boys, who were also standing on stage, the band launched into “You Say It’s Your Birthday.” They shoved a microphone into my hand, and I turned to face the crowd.

“You say it’s your birthday,” I yelled into the microphone. “It’s my birthday, too, yeah.”

I glanced down at the mic. Was this thing on? Or had the band wisely turned my mic off? All I heard were the instruments. I wasn’t sure anyone else could hear me either. Which would clearly be to everyone’s benefit.

So, I kept on singing. I smiled out at the crowd. Some of them smiled back. I grasped my microphone, belting out the song. I danced around the stage.

As I sang and danced, I pondered what the hell was happening. I had never sung on stage in front of an audience before. My two singing lessons, a few months back, had proven less than encouraging. So, why wasn’t I a nervous wreck? Why did I feel so at ease with all this? Why did this feel so right?

But, as the first stanza ended and the music continued, I became briefly confused. When do I come in again next? Should we be singing now? I stood limply, uncertain, for a few minutes and then glanced at the keyboardist. His mouth was moving. Damn. I collected myself and quickly chimed in, finishing the song, but with only some of the gusto and confidence I once had.

I learned later that the “earplugs” which singers wear are actually a kind of monitor allowing them to hear what the audience is hearing. This was why I could only hear the instruments and not my own voice or the keyboardist’s. And why I found myself momentarily lost.

If I’d rehearsed with the band—or had any musical background at all—I might have made it through the song snafu-free. But the reality is, The 52/52 Project is about going outside my comfort zone while trying something new, encountering both successes and failures. And this experience, clearly, had included both.

Although I failed to nail the timing of my song, a few people in the crowd told me I did great. It probably helped that most of them had been drinking all day. As I guzzled a drink, far too little too late for me, even my son—and God knows our children are our biggest critics—told me I did a decent job.

Whether or not my performance was a success wasn’t the real issue though. What struck me as noteworthy was that, other than that mid-song error, I’d felt perfectly at ease singing with the band. Even unprepared, in front of a crowd of seventy-five or so, I’d endured little stage fright.

After living through twenty-seven other frightening and often humiliating new ventures, had I become braver? Or just more desensitized to fear? Or, maybe, was I was simply destined to perform on stage? Yes, I’d go with that.

I still had twenty-four new experiences to go. I knew I’d face every one of them with more courage than I had once imagined. My journey wasn’t finished yet.

Who says it’s over when the fat lady sings?

How much should I pay my son to delete the video from his iPhone? What song would you have chosen to sing? On a scale of 1-10, what's your level of stage fright?

Posted by sherry stanfa-stanley at 7:45 PM