You Can Ring My Bell 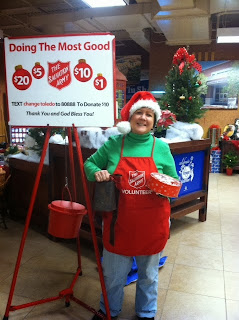 With so much of The 52/52 Project focused on experiences that could potentially frighten or embarrass me, I decided to undertake a small venture I hoped would result in a positive outcome for someone else.

Every Christmas holiday season when I spy the Salvation Army volunteers and hear their bells ringing, I toss them a couple dollars—on my first several passes. Then, I spend the rest of the holiday season attempting to slip past them without making eye contact.

I decided to make amends this year by making it my mission to help those the Salvation Army serves, by collecting a bucketful of cash.

When the organization contacted me with instructions, I was told I couldn’t directly ask anyone to contribute. This was SO fine with me. Although I work for a fund-raising organization, my job entails communications; fortunately, I’m not required to ask people for money. I chose this experience for the good I hoped it would do, but also because I figured it would still take me a bit outside my comfort zone.

The volunteer coordinator did, however, offer a few suggestions to encourage giving. So, I bought ten dollars’ worth of candy canes and chocolate Kisses, and I headed out to a nearby Kroger store, wearing a Santa hat and a big smile.

I rang a bell for three hours, and I came away learning a few things about human nature.

First, I learned that bribery works. The people with children in tow nearly always gave something. And when I asked if I could offer their youngsters some candy, most parents nodded and admitted that was precisely why they were contributing—because the children had already spied the candy and begged for a piece.

A couple youngsters gave me money from their own pockets or wallets. In return, they got to ring the bell and received an extra dose of candy. Hell yes, they did.

I also learned that some people won’t—or can’t—give, no matter what. Even when I offered my brightest smile and warmest greetings, some folks went out of their way, literally, to avoid me, by walking diagonally across the store lobby. I couldn’t judge. I’d done the same thing myself, just last year.

Although most adults shook their heads at my offering of candy, a few approached me and asked for a piece without putting a single penny in the bucket. I wanted to call them out on this, but I pushed aside my own Scrooge side by simply smiling and wishing them a Merry Christmas.

Even some of the non-contributors still provided a laugh. As an elderly man in an electric scooter passed, I rang my bell and shouted, “Ho-ho-ho!”

He glided by, without pausing, and retorted, “Don’t say that on a downtown street corner.”

Finally, I learned the more I gave of myself, the more others gave.

I started out the evening by simply smiling and offering holiday greetings to the store’s customers. By the end of the night, I found myself dancing and pounding my bell against my hips, in rhythm to a silent version of “Jingle Bell Rock.” A few people grinned and said, “Are you dancing to the music in your head?” Spurred on, I gathered the nerve to whisper the tune, and eventually I belted it out.

The smiles grew. Several customers glanced at me and said, “Well, you sure seem happy!” And, apparently, people’s hearts are warmed by the sight of a jolly old elf. Once I became more enthused and more engaged, the customers did, too.

One man cocked his head and raised his eyebrows at me, but then he stopped just before he reached the exit. He came back and stuck some greenbacks in the bucket. They didn’t make it all the way through the slot, so after he walked away, I reached down to push them in. I didn’t count them all, but I did get a good look at one: a ten-dollar bill.

I figured roughly half the people who came in and out of the store put at least something in the kettle. My gig proved far more successful than I expected.

Yet the success of the evening wasn’t measured only by numbers. My favorite moment of the evening came when a woman stuck a couple dollar bills in the bucket and I held out my tin of candy and asked, “Would you like a treat?”

She shook her head and smiled. “No, thanks. Being able to help IS my treat.”

That way of thinking is probably the greatest gift of all.

P.S. Thank you to the readers who showed up at the supermarket that day to say hi, including Linda Wagner Truman, who brought me a cowbell to ring!

How will you give this holiday season? What charities is it a treat for you to help? Does that Santa hat bring out the red in my blood-shot eyes?
Posted by sherry stanfa-stanley at 10:25 PM